Check here regularly for easy, healthy recipes that a single dad can use to create a happy, healthy, and fulfilled lifestyle for himself and his children. For more information about the author, including videos, scheduled events, bibliography, and more, check out Author Profile: Matthew S. Field.

Like a lot of guys, I’m trying to push back against Mother Nature’s insistence that I age. One of the more frustrating, albeit gradual, changes has been my slowing metabolism. Every year, it seems, it gets harder and harder to stay in shape. Yeah, I try to eat right. I exercise like a 20-year old. I use a push mower to cut my grass. I shovel snow from my driveway. Based solely on my activity level, I should look more like Los Angeles Angels outfielder Mike Trout and less like Red Sox third baseman Pablo Sandoval.

So, I’ve upped my game a little and ratcheted up my diet focus. I refer to “diet,” not as “on a diet,” but rather focusing on good eating habits. Part of that includes all but cutting the carbohydrate “Big 4,” pasta, rice, bread, and potatoes. I also bought a Vitamix blender and have experimented with some new smoothies. What I call “The Peanut Butter Cup Smoothie” is my favorite.

Starting with milk, add all ingredients in blender. For best results, start blender on low setting after milk is added and add powders. Then, add crushed ice. Blend until smooth.

The Peanut Butter Cup Smoothie is not only very filling, easily replacing a meal, but it is also high in protein and low in calories. Assuming the protein powder is plant-based, the smoothie contains 35 grams of protein and just 454 calories and 31 grams of carbohydrates. That’s not even the best part. It tastes just like a peanut butter cup.

Who said eating healthy couldn’t also taste good? And, by replacing a meal or a snack with this smoothie every day, I just might start to have a few more things in common with Mike Trout. 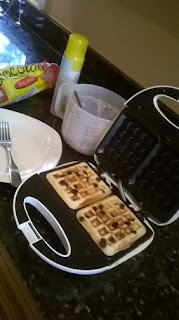 In a continuing quest for a healthy lifestyle, I’ve decided (again) to try a gluten-free and a reduced dairy diet. Well, in part, my last check up and blood work suggested that I could stand a little less cholesterol, so I’ve really cut back on dairy. My nemesis was cheese, but I digress. Plus, considering that at least one of my children tends to have sensitivities to a variety of foods, I’ve really doubled-down on healthy diet.

I’ve come up with what I think is an extremely nutritious, tasty, (relatively) low calorie, and protein-packed pancake and waffle recipe. 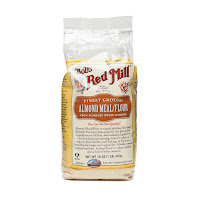 This is a great way to have pre-made batter for as many as two or three breakfasts during the week. Depending on children's ages, one or more of them can also just preheat a pan or waffle iron and have a satisfying meal without much work.

Thanks to single father Brian Austin for this healthy, summer grilling-season recipe:

In a mixing bowl, combine ground turkey, diced apple, diced onion, egg, and bread crumbs. Add either Montreal Steak Seasoning or Weber Grill Burger Sensations Seasoning to taste. Mix until all ingredients are consistent throughout. Fashion mixture into eight, slightly-larger-than quarter pound patties. With medium heat, grill for about ten minutes on each side or until there is no pink in the middle of the burgers.

This recipe completely dot’s the i’s and crosses the t’s when it comes to The Single
Father’s Guide recipes. Each patty is low in fat, very high in protein considering both the ground turkey and the egg, a good amount of dietary fiber, and a good source of vitamin C. Sure, add a

Italian Wedding Mac 'n' Cheese a la Dad
2 - boxes of macaroni and cheese
1 - one pound package of mild Italian sausage
1 - eight ounce package of frozen spinach
6 - individually wrapped slices of American cheese
1 - cup of milk
1 - tablespoon of salt
﻿
In a pan, brown Italian sausage. In a large pot, bring water and salt to a boil and add two boxes of macaroni and let cook for about five minutes. Add frozen spinach to the pot and allow to cook for another five minutes. Drain. While macaroni and spinach are ﻿﻿﻿﻿draining, add milk, cheese packets, and six slices of American cheese to empty pot. Stir while allowing to warm until cheese is melted. Stir-in browned Italian sausage along with some of the grease. Stir in drained macaroni and spinach.
What Have You Fruit Salad


One of the very cool things about summer is the variety of fresh and mouth-watering fruit available from grocery stores, farm markets, and growers.

A few weeks ago, I took the two Beautiful Daughters and The Favorite Son (TFS) to the grocery store before taking them to camp. I told them that I would get them a "special" breakfast of, get this, DOUGHNUTS! Doughnuts are probably a two or three times a year breakfast entree essentially void of nutritional value, but I still followed one of my "Single Father's Golden Rules" from The Single Father's Guide to Life, Cooking, and Baseball, "Include a fruit or vegetable with every meal."

Each of the kids chose and had to eat a piece of fruit from the wide selection of fruit in the store's produce section before they had their doughnuts. The First Beautiful Daughter chose a pink lady apple, The Second Beautiful Daughter had two apricots, and TFS enjoyed a black plum. With my conscience assuaged a little, my little campers enjoyed their doughnuts; each could picked out two.

The spin-off from this "fun" breakfast was my realization that a lot of new fruit crops had finally arrived in New York State including peaches, several varieties of plums, apricots, as many as a dozen kinds of apples, mangoes, melons, nectarines, pears, berries, citrus, and much, much more. While I had a minute and I was already there, I stocked up on a bunch of sale items including red delicious apples, white peaches, black plums, cantaloupes, to name a few.

A couple days later, I needed to get the kids from camp, which ended at 4:00 p.m., and go directly to the gym where we practice Taekwondo, which started at 5:00 p.m. The cache of fresh fruit saved me again and became part of the on-the-go meal that included baked chicken that the kids ate in the car on the way to the gym.

Most of the time, single dads, meals don't have to be complicated to be healthy and tasty. The What Have You Fruit Salad is truly one that is made of what you have in your refrigerator. Here is how I made mine:

What Have You Fruit Salad

Cut the cantaloupe into thin wedges and slice off skin. Cut into chunks. Then, also
cut apple, peach, and plum in wedges, but leave the skins on. Cut into chunks.
Place chunked fruit into a bowl or storage container and serve as either a side dish
or a healthy dessert for a single dad and his summer-loving kids.

Of course, what you don't eat can easily be put into the blender the next morning and turned into a great fruit smoothie!

In a large sauce pan or a small soup pot, add one cup of water, chopped basil, and 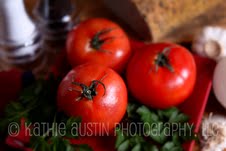 either two packets of dried onion soup mix or half a diced onion and a large beef bouillon cube, and bring to a boil. Cone-cut the stems from the tomatoes, then squeeze each tomato gently to expel seeds. Place the stemmed and seeded tomatoes and one cup of milk into a blender and mix at low speed until pureed. Add tomato puree and ¼ teaspoon of pepper to soup pot, and stir. Turn burner to medium-low and simmer until onions are tender. Serve with crackers or a whole wheat roll to three hungry children and a single dad on a brisk, spring Saturday or Sunday.

As a single father, I continue to test different foods and different ways to prepare foods for the kids. Recently, I tried my version of an egg white omelet and, fortunately, all three of my kids really liked it. They've continued to regularly ask me to make it for breakfast. It’s a meal that’s chocked with protein to help The Beautiful Daughters and The Favorite Son feel fuller longer, contains very few carbohydrates, and a reasonable amount of fat. Better yet, it’s crazy-easy to make. 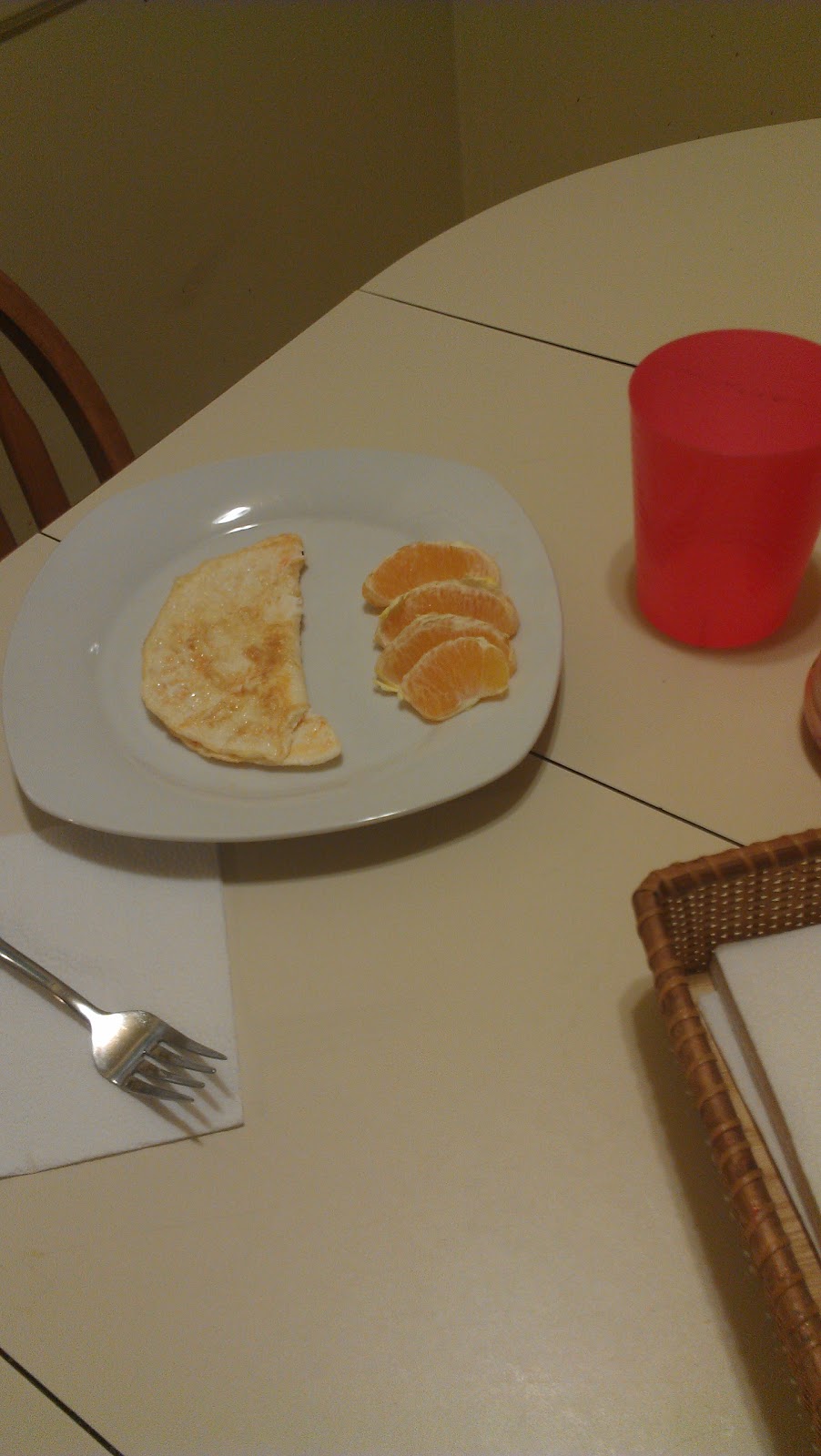 16 ounces off egg whites (or 8 eggs, if you prefer)
2 pinches of pepper
4-6 dashes of hot sauce
2 tablespoons of ranch or bleu cheese dressing (low fat or no fat preferred)
1 tablespoons of olive oil
1 cup of shredded cheddar cheese

Pre-heat a small (8”) pan on cooktop. Coat pan with cooking spray or 1/2 tablespoon of olive oil. Combine eggs, pepper, hot sauce, ranch dressing, and 1/2 tablespoon of olive oil. Whisk with a fork until mixed. Pour half of the mixture into pan and sprinkle on 1/2 cup of cheddar cheese. Cook about 4 minutes or until eggs “fluff.” Then, using a soft spatula, fold in half on the pan and cook for 2 minutes on one side, flip omelet, and then cook for two more minutes or until eggs are no longer “runny.” Repeat with the rest of the eggs and cheddar cheese. Makes two BIG omelets: one for dad and one shared by the kidlings.

Blend for thirty seconds or until ingredients are smooth. Makes about 36 ounces or about three, frosty, twelve ounce beverages, each of which contain 233% of the recommended daily allowance of vitamin C and fewer than 150 calories! 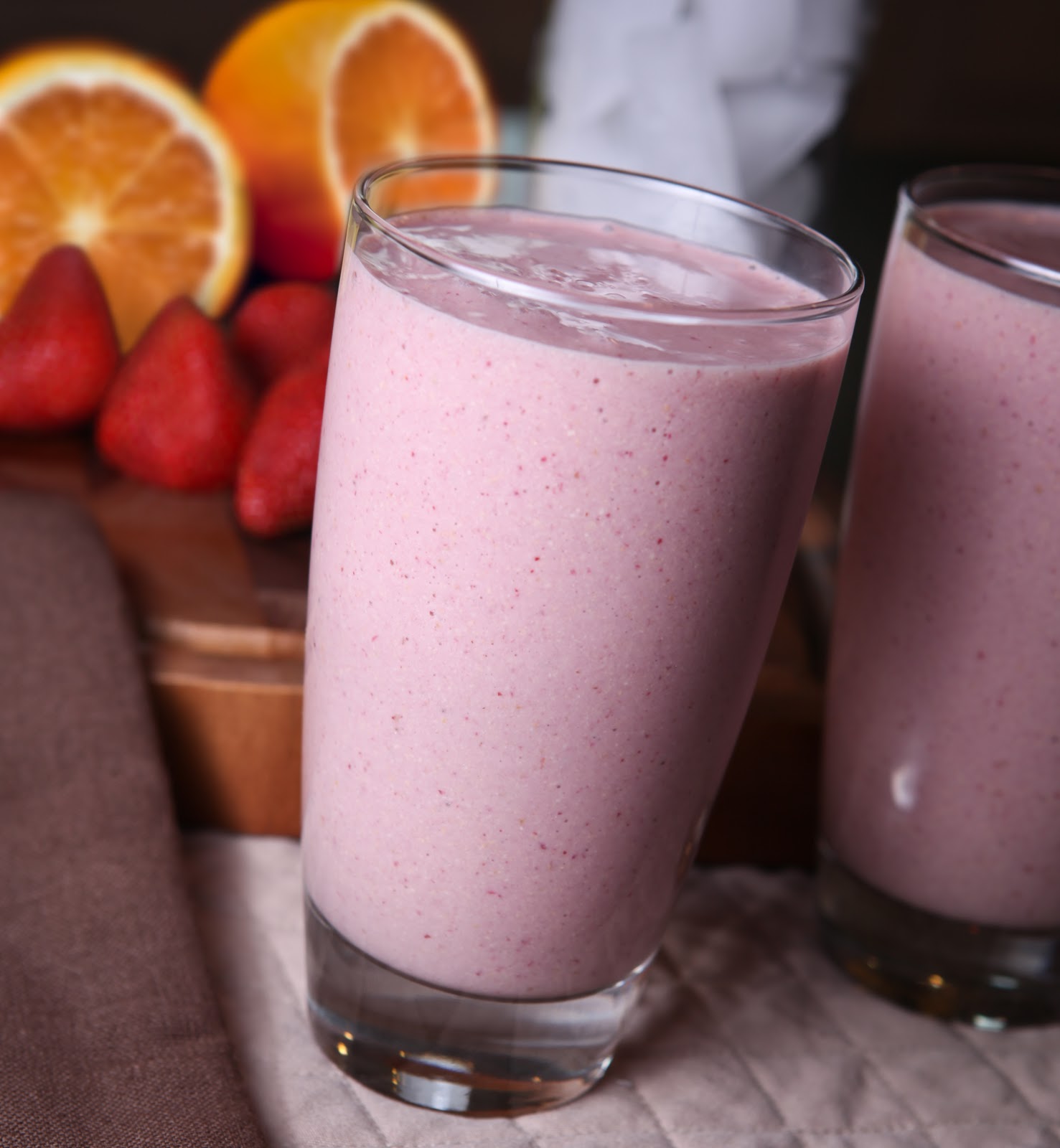 Having some trouble getting your kids to eat their vegetables? Here's a quick and easy way to make sure they do.

5 - 6 large potatoes, washed and cut into chunks with the skins on
12 ounces of cauliflower
2 cups of milk
1 cup of cheddar cheese, shredded
4 garlic cloves, crushed OR 1 1/2 tablespoons of garlic powder
4 ounces of butter OR margarine
Salt to taste
In a large pot, bring water to a boil and add the chunks of potatoes and cauliflower. Cook for about 20 minutes or until potatoes are soft enough to mash. (Test with a fork.) Drain water and return potatoes and cauliflower to pot. Add milk, cheddar cheese, garlic, and butter or margarine, and mash. Remember, both the cheddar cheese and the butter or margarine are relatively high in sodium, so add or (don't add) salt to your own personal taste.

Among other benefits, potato skins are a good source of vitamin C, fiber, and several important minerals. By leaving the skins in the recipe, the nutrition improves significantly. In addition, the cauliflower will be imperceptible to even the most sensitive palate and will effectively replace some carbohydrates with a low calorie, high fiber, and high vitamin C food. Eaten in moderation, "Sneaky Garlic Cheesy Mashed Potatoes " is a great complement to a meal, which might include a low fat protein and another healthy vegetable, for a single dad and his three growing children.

Remember, it really is a game of inches!

1 leftover venison roast (or any meat you have), cubed

2 slices of bacon (because bacon makes everything taste better)

6 quarts of water
8 ounces of milk
4 potatoes, cubed with skin on
6 carrots, sliced

2 onions, diced
2 cups of broccoli (or any green vegetable you have)
6 garlic cloves, crushed
2 tablespoons of whole wheat (or white) flour

Anything else you want to add

Remove outer leaf and stem from lettuce, hand shred in a colander and rinse. Toss with carrots, cucumber, mushrooms, cranberries, cashews, and shredded cheese. Dress with favorite vinaigrette. Heat a large frying pan to medium or medium-high. Add olive oil, lamb chops, peppers, onion, garlic, salt, and pepper. While regularly stirring the vegetables, cook lamb 4 – 8 minutes on each side, considering preferences for meat temperature. Enjoy with a bottle of wine with an interesting adult when there’s no one else in the house. 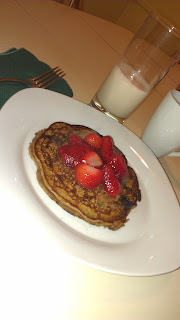