The Favorite Son Saga: Only One Green Jacket

The weekend before last, The Favorite Son (TFS) and I watched on television the final round of the Master's Tournament. TFS's favorite golfer is Tiger Woods, but we didn't get to see much of him during the last round.

As final rounds go, the final 18 holes at August National this year was fairly entertaining. Patrick Reed finished at -15, holding off Rickie Fowler (-14) and Jordan Spieth (-13), who tied a Master's Tournament record with a final round of nine under par.

With Fowler in the clubhouse at -14, Reed continued to make great shots and clutch putts as he came in. TFS asked, "What happens if two players tie?" 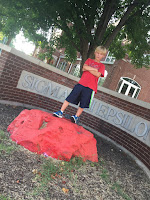 I answered, "The golfers who finish 72 holes, tied, play sudden-death holes until one player scores better than the other or others."

TFS thought for a moment and, finally, said, "Well, there's only one green jacket."

Ain't it the truth?

A widower of three years, the father of a middle-school age daughter, and an all-around solid-citizen and good man uses an on-line dating app. After many starts and stops, the widower single father (WSF) finally meets a woman, who seems too good to be true. She’s educated. She’s unusually attractive. She lives only one town away from the WSF. She enjoys the same kinds of recreation and hobbies that he enjoys. She has children of her own. She appears to be as attracted to him as he is to her. She’s the whole package. WSF wonders, “Could I be so lucky to find a second true love in one lifetime?”

he night with WSF’s his house. Rather than sleeping in his bed, however, the woman stays in in the bedroom with WSF’s daughter so as not to suggest any inappropriate behavior between WSF and her. WSF’s little girl who experienced the most heartbreaking loss that she could possibly imagine, the death of her mother just three years earlier, quickly begins to connect in a very profound way with the woman. Within two weeks, WSF has introduced his daughter to the woman’s children. WSF includes the woman in a family holiday celebration. WSF’s daughter begins to refer to woman as, “Mommy.”

Literally, within a month, WSF has what he believes is a life partner. Moreover, his daughter not only has a new mother, but almost instantly, he and his daughter have an ostensibly big, spirited family including the woman's children. “Although it may be a little soon,” WSF thinks to himself, “I know what I want. I want to make this woman my wife.”

WSF buys an engagement ring and, at Christmas, plans to ask the woman to marry him. Then, three weeks before the special day and only about two months after WSF’s first date with her, the woman abruptly ends the relationship to pursue a relationship with another man.

Uh, no. If you're wondering, I'm not the WSF in this case.

Not only did the woman devastate WSF and break his fragile heart, she also, very literally, traumatized the man’s daughter who developed a very profound connection with the woman.

Is the woman at fault for creating additional suffering in the widower’s life and in the life of WSF’s innocent daughter? Well, yeah. What were the woman's intentions with WSF and his daughter? Frankly, it doesn't really matter.

As adults, we should know that there are people in the world who don’t have our best interests at heart and may even intend to do us harm. Heck, we have locks and security systems at our homes and businesses to prevent those who want to injure us or steal from us from doing so. Should we as single men, whether divorced or widowers, be any less cautious when it comes to protecting our hearts and the well-being of our children?

The answer is, obviously, “Of course, not.”

When should we as single fathers introduce our children to a woman with whom we have a relationship?

In The Single Father’s Guide to Life,Cooking, and Baseball, I included among my “Single Father Golden Rules, “It should be an exception that you introduce your children to your romantic interest, and do so only if you are reasonably certain there is potential for a relatively long-term relationship.” While true, what does that actually mean? In my estimation, there are two, perhaps three factors a single father should consider when introducing his children to his romantic interest.

Before a single father even considers dating, much less introducing his children to his romantic interest, the single father should first make sure he’s ready to date. The single dad has had a meaningful relationship with his wife or committed partner end through divorce or death. When something as important as a marriage or committed relationship ends, we tend to feel loss and must grieve. One important step for a man to become “ready” to have another relationship is to fully grieve the loss. If there was a behavior that directly contributed to the end of that relationship, perhaps an addiction or other detrimental habit, the single father should resolve those behaviors before starting a new relationship. Otherwise, that new relationship will also be doomed to fail. Why even considering involving children in a relationship that will not last?

Next, in terms of the example of our widower with the middle school-age daughter, a single dad should really know something or, more accurately, quite a bit about the woman he’s dating before he introduces his child or children to her. At the very least, WSF should have waited several weeks, if not several months, before he introduced his daughter to the woman. While a woman may not have malicious intent, she may have. Maybe, she was just ignorant about her own behavior, desires, or intent. She may not have been emotionally healthy. A single dad may be infatuated; he may be lonely. Still, the single father has a responsibility to protect his children.

Perhaps a third determinant is a child’s age. A single father may make one decision about introducing a romantic interest to a child who is 17-years old and a different decision if child who is seven-years old. Obviously, the older the child, the more likely the child is to have realistic expectations about his dad's girlfriend. In general, a single father should take more time with his romantic interest if he has younger children. Had WSF taken just three months, for example, the woman he dated would never even met WSF's daughter. While WSF may still have had his heart broken, he would have spared his daughter the pain of enduring another devastating and, perhaps, life-altering loss in her life.

Considering all of the people in the world who carry relationship baggage, emotional scars, and unreasonable expectations, dating is tedious and exasperating . . . on a good day. When you combine parenting and dating, well, I’m not sure if it’s like mixing oil and water – they don’t, or if it’s like mixing nitric acid and glycerol – they become volatile.

If in doubt, the best course of action is to first consider a child's welfare. Of course, a single father can’t make a mistake if he waits until his kids are in college before he introduces a romantic interest. By then, kids will probably think that Dad waited too long to introduce them to his romantic partner, but what do they know?