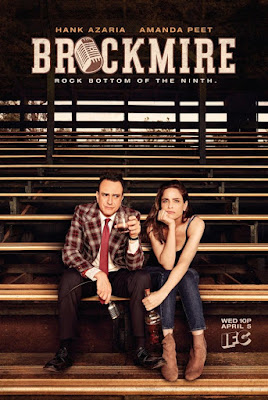 Independent Film Channel (IFC) has a new, dark comedy centered on baseball. If you haven’t seen it, you’re missing a great show. It is as smart as it is hilarious. It’s Brockmire.

Hank Azaria, perhaps best known for his voice work on The Simpsons as Moe Szyslak, Apu Nahasapeemapetilon, Comic Book Guy, and Chief Clancy Wiggum is Jim Brockmire. Brockmire is a former play-by-play announcer for the major league franchise in Kansas City and a high-functioning alcoholic. After an on-air, whiskey-fueled, sexually explicit rant about his "swinging" wife, Brockmire becomes fantastically famous, or, more accurately, infamous, as the subject of first viral video of the social media era. Obviously, he's fired by the team.

I went home to surprise my wife on our anniversary and, please imagine my surprise when I came home to find half a dozen naked folks sprawled out in my living room in what can only be described as a desperate and hungry kind of love making. Right in the middle of it was my wife, Lucy. Fastball misses, just low, count goes full, three and two.

(That represents, perhaps, the least offensive quote in the entire script.)

Brockmire’s tirade becomes hilariously more graphic and acerbic as horrified heartland listeners freeze in shock while team staff members try, in vain, to get into the broadcast booth to stop him.

Media-savvy owner of the minor league Morristown (PA) Frackers, Jules, beautifully portrayed by Amanda Peet, tracks down Brockmire who’s been announcing cockfights, living in bars, and sleeping in brothels in Manila. Jules hires Brockmire to call play-by-play on the public address system for the financially-strapped and struggling Frackers. Jules, who has taken a second mortgage on her bar to buy the team, is as much a match for Brockmire’s cynical wit as she is for his appetite for alcohol. She hopes Brockmire’s proclivity for amusing absurdity will not only draw more fans to the stadium, but will also provide exposure for the Frackers through concerted social media posts of his "cannot tell a lie" tirades.

The second episode, “Winning Streak,” Brockmire finds himself in Jules’s bed after a drinking contest that ends in a draw. Brockmire stays in character, calling play-by-play of the outrageous sexplay. The next day, the Frackers win. Baseball enthusiasts, both Brockmire and Jules adhere to the time-honored tradition of baseball streaks and superstitions continue to their torrid affair. In some cases, hilariously, and in some cases, cringe-worthy, they do and the Frackers continue to win.

Brockmire has plenty of foils including his teen-age producer, Charles (Tyrel Jackson Williams), the past-his-prime, cocaine snorting slugger, Pedro Uribe (Hemky Madera), and Lucy Brockmire (Kate Finneran), herself, all of whom provide ample opportunity for the subtle social commentary which the game so often provides. Considering Brockmire, like to Bull Durham, is character focused, IFC has a formula for success where other baseball productions have failed. IFC even has a little fun with Brockmire as it keeps Azaria in character to do commercials for the real Sam Adams Lager.

If there is one criticism of the otherwise reasonably realistic series is that the main characters are far too healthy and attractive to be career alcoholics. While Brockmire does exaggerate for effect including uniforms that are just a bit dingier than they should actually be, overstated clubhouse “characters,” and more garbage left in the stadium stands than could have possibly been created by the sparse gate, Brockmire and Jules look great for a fifty-something and a thirty-something, respectively, who drink their breakfasts, lunches, and dinners.

If one willingly suspends his disbelief with this one, relatively small issue, however, you’ll have found one of the most entertaining thirty minutes on any one of your 600 television channels. Especially, but not necessarily, if you happen to love baseball.

As the late St. Louis Cardinals announcer Jack Buck might have said, "That's a winner, folks."