Seriously, folks, when it comes to the National Football League (NFL), which once touted itself as "America's Game," it’s time to “vote with our feet.”

The idea of voting with one’s feet hearkens to a time before e-commerce when people actually had to walk in to a store (using their feet) to buy clothes or groceries or appliances or something else. If the quality of the product or service did not meet a customer’s needs, he or she simply used those same feet to walk out. If a vendor consistently provided a substandard product and if enough feet “voted” to walk out, that business, well, went out-of-business.

For a while now, the entertainment value of the NFL has deteriorated to the point, I believe, that the games are unwatchable. I have three reasons for my belief. First, ambiguous rule changes with which it is difficult for players to comply and often arbitrary interpretation of those rules has dulled the sharp edge the game once had. Second, too many players are criminals and ignorant spoiled brats. Any machine composed of defective parts is, by association, defective. Finally, the game has become less about, as ABC’s Wide World of Sports put it, “the thrill of victory, and the agony of defeat: the human drama of athletic competition,” and more about social justice.

Football is a game in which one team’s gain is the other team’s loss. It’s a game of misdirection. It’s a game of surprise. It’s a band of brothers working together and striving to execute each play perfectly for 60 minutes while the opponent tries to legally disrupt its adversary from its objective. An offense uses running plays to set up a pass. Sometimes, a when a pass play is the obvious choice, the offense calls a draw play. It's a game of risk and reward. It's a game played by modern-day gladiators. At the end of the game, the players, having left their blood, sweat, and tears on the field, walk off the field victors or vanquished.

Over the years, however, the NFL has changed the game, specifically making it more difficult for defenses to defend the pass. “At the moment, the league is dealing with an unusually explosive offensive period in the game's history,” according to Simply the Bets in its January 16, 2016 article “Trends in the NFL Over the Years.” One of the most significant changes has been the addition of the “defenseless player rule.” In short, the NFL created a rule to prevent a player who is considered defenseless from contact:


While no one wants to see a player injured, it is nearly impossible during a game situation to determine whether a player is defenseless. In addition, a proper tackling technique includes a “head up” and “explode” components. It is almost impossible to use proper tackling and not frequently make helmet-to-helmet contact. If the official’s often arbitrary determination that a player is defenseless, a defensive player who does everything right is penalized. These calls routinely affect the outcome of games.

More importantly, these and other rule has impacted game strategy. Time was, when a receiver ran a post pattern and looked back for the ball, the defensive back would “light him up” to reinforce that gridiron real estate belongs to the defense. If the receiver wanted to use it, then he'd have to pay a price. Such games within a game don’t exist anymore. All offense and no strategy makes the NFL a dull league.

As an aside, it is my humble opinion that the explosive growth of fantasy football and associated quasi-gambling sites like FanDuel and others are a natural consequence of these rule changes. The average fan can no longer watch the game because it no longer provides drama. He or she has to build his own virtual team, watch those players, and create some excitement on their own. It no longer really matters which team wins as long as a fantasy football player's quarterback throws four touchdown passes or a running back rushes for 100 yards.

Next, I find it difficult to respect any athlete or performer who lacks character and integrity. Call me old school. Call me obstinate. Of course, no one is perfect, but it seems that the NFL has more than its share of criminals among its ranks. Among the criminals on the NFL payroll is Johnny Manziel who, according the to Dallas Morning News on April 26, 2016, "was charged with misdemeanor assault. He is accused of kidnapping, hitting and threatening to kill Colleen Crowley earlier this year."

A partial list of some of the other NFL employees who have beaten women, sexually assaulted women, abused animals, fired a gun into a crowd, hit a pedestrian with an automobile and fled the scene, resisted arrest, and/or abused children includes:

This is only a small sample of the crimes for which NFL player have been arrested. Many more can be seen at on the USAToday website at http://www.usatoday.com/sports/nfl/arrests/. Accessed on September 13, 2016, the database shows 829 arrest, indictment, and/or conviction records. Considering each of the 32 teams is allowed 53 players on their active rosters and five players on the practice squad, there are only 1,696 active NFL players at any given time. Would you do business with any organization that employed nearly 900 criminals?

Finally, the straw, or rather the cinderblock, that broke the camel’s back, at least or mine, is the disrespect for a country that has allowed an NFL player to make millions of dollars is, yes, Colin Kaepernick’s decision kneel during the National Anthem. Rather than to pay respect to the men and women who have provided his First Amendment rights, he and dozens of other players chose to "take a knee" rather than stand during the playing of The Star-Spangled Banner.

Let's get this straight. In the country that has provide Mr. Kaepernick the opportunity to make a guaranteed $61 million dollars for playing football, he refuses to pay it respect. Yes, the flag and The Star-Spangled Banner are symbols. Yes, the people in the United States continue to strive to address and resolve our disagreements. Yes, Mr. Kaepernick and others have the right to their speech. Yet, the same media and social justice crusaders who defend Kaepernick for taking a knee to protest the things for which he believes the United States stands disparages others for taking a knee to practice another freedom. 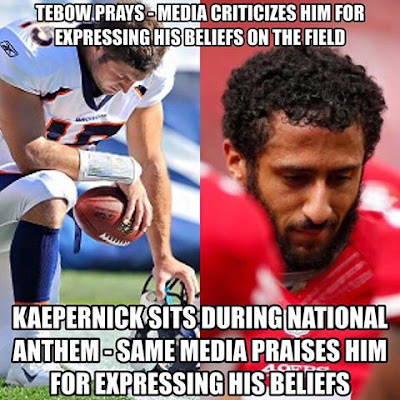 It is also disappointing that other NFL players who have a contrary opinion lack the courage or fear the recriminations from the league or the media. Where is this generation of NFL on-the-field leaders like Reggie White? Or Gale Sayers? Or Roger Staubach? Or Dan Dierdorf? Or Walter Payton? Where are the retired elder statesmen who still work in the NFL like John Elway, Ozzie Newsome, Martin Mayhew, and Doug Williams? As for this generation of NFL players, there don't appear to be many leaders. One might ask the elder statesmen the reason for their silence.

As a man and who grew up with a passion for an NFL team, whose family had season tickets to the "Big Red" St. Louis Cardinals at Busch Memorial Stadium during the 1970’s and 1980’s, who has since attended many football games, who's bought my share of NFL gear, and who has been a consumer of DirecTV’s NFL Sunday Ticket, I'm voting with my feet. The NFL has lost its edge, is played by criminals, and managed by hypocrites. This is no longer America's Game and you won’t catch me watching much football on Sundays any more.