As I sat at a table for two at Fetch Bar & Grill in Warwick during a recent date night with the lovely Kathie Austin, I had a bird’s eye view of three charming young women who enjoyed cocktails and appetizers at the bar. I estimated the womens’ ages to be mid-20’s, each was attractively dressed and their mannerisms suggested education and grace. If I’d had to guess, the three were sorority sisters a couple years out of college reuniting to catch up and have some fun.

After a few minutes, some young men joined the group and were enthusiastically welcomed. In contrast to the ladies, however, the men hadn’t shaved, had unkempt hair, wore shabby jeans half of the way down their posteriors, and, for all intents and purposes, were rungs below the social ladder from the women who seemed to be more than happy to see them.

“Where have all the good men gone?”

This isn’t the first time I’d observed this phenomenon. This time, perhaps because I’ve seen similar qualities in the boys with whom my teenage daughters count as friends, I decided I’d better look a little closer.

According to Helen Smith, PhD in her book Men on Strike: Why Men Are Boycotting Marriage, Fatherhood, and the American Dream – and Why It Matters, men 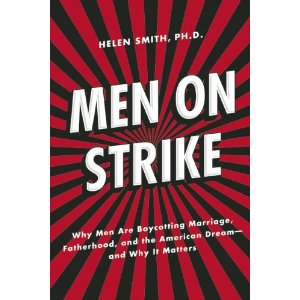 . . . are dropping out of college, leaving the workforce, and avoiding marriage and fatherhood at alarming rates. The trend is so pronounced that a number of books have been written about the “man-child” phenomenon, concluding that men have taken a vacation from responsibility simply because they can.

According to Dr. Smith’s research, however, men aren’t withdrawing as a result of easier access to sexual partners, Internet pornography, or “simply because they can.” While these factors may be moderators, the real reason is a reality in which men are simply

. . . acting rationally in response to the lack of incentives today’s society offers them to be responsible fathers, husbands, and providers. In addition, either consciously or unconsciously, because they do not want to be harmed by the myriad of laws, attitudes, and backlash against them for the simple crime of happening to be male.

Smith contrasts the culture’s attitude toward infidelity as an example:

. . . cheating women are celebrated and encouraged by the culture . . . Whoopie Goldberg nonchalantly talked about how she cheated on her husband with little judgment or repercussions by society. In an interview, she stated, “Is screwing around five or six times while married and with different men for that matter something you can say casually? In the celebrity world perhaps.” But if you are Tiger Woods, you can be hit in the head with a golf club if you cheat and society cheers your wife for being empowered.

It’s not just young adult men who have "Gone Galt," a reference to Ayn Rand's character John Galt in her novel Atlas Shrugged, and withdrawn to their man caves and away from commitment. According to men’s rights activists Glenn Sacks and Dianna Thompson who Smith references, “The US marriage rate has dipped 40% over the past four decades, to its lowest point ever . . . in the face of a family court system which is hopelessly stacked against them, have subconsciously launched a 'marriage strike.’” Many adult men who have married, divorced, and subsequently been abused by a legal system biased toward women’s reproductive rights and financial support of the children for whom a man may or may not have contributed his genetic material believe that there is little incentive to marriage.

In the chapter entitled “Marriage Strike,” the author summarizes, “Our society tells men they are worthless perverts who reek of male privilege while simultaneously castrating them should they act in a manly manner, and now women are upset because men are being feminized? You reap what you sow.” Concluding, Smith queries, “Our society has become the angry leered-at woman who doesn’t care that men can build buildings or do amazing things like be good dads, husbands, and sons. She focuses instead on the small flaws and extrapolates to all men; they are all dogs, rapists, perverts, deadbeats, and worthless. Who needs them?"

Well, for one, many women who aren’t angry, who appreciate creative, complex masculinity, and who want to have a healthy, loving, and committed relationship with a man, have discovered there are fewer good men who haven’t gone Galt. While this may be great news for the confident, considerate, masculine alpha males because there is less competition for attractive quality women, sadly, these new cultural realities have created a world in which my two Beautiful Daughters will have fewer choices for a partner when they're ready. I’m at least as concerned for my son, however, who will have to navigate these influences as he attempts to mature and actualize into manhood.

Dr. Helen Smith’s Men on Strike: Why Men Are Boycotting Marriage, Fatherhood, and the American Dream – and Why It Matters is one of the most relevant, informative, and prescient non-fiction I’ve read during the past 20 years. In short, it's a great book. You can learn more about Dr. Smith at her blog:

And finally, guys, you can get your own copy of Men on Strike yourself and read it. You can thank me later.

BUY IT! Men on Strike

Perhaps it is so much easier to complain than to have to get emotionally vulnerable. So many excuses and so much time wasted.

Thanks Dr. Helen, I’m a 23 year old guy not planning on getting married, the feminist movement has gone to far in my opinion, so many reasons to stay single, I suppose if I met someone exactly like you I could fall in love.