Orange Magazine: Lessons in Life from a Single Dad

A few months ago, I got a call from Arundel Publishing marketing director Aimee Henkel. Aimee told me Orange Magazine, which a much less salacious and significantly more informative Hudson Valley version of People Magazine, wanted to do a story on my family and me in the context of my book and single father parenthood. Considering Arundel is the publisher of The Single Father's Guide to Life, Cooking, and Baseball and considering that I'm a team player, I said, "Yes, of course!"

A few weeks later, an extremely professional and thorough reporter, Deb Botti, visited us at our home in Warwick. Deb and I spoke for about an hour before the buses delivered children home from school. Because The First Beautiful Daughter had lacrosse practice, Deb spoke only with the Second Beautiful Daughter, The Favorite Son, and me.

More time passed before I got a call from Anthony Puopolo, a professional photographer whose clients include Mercedes-Benz and The New York Times in addition to Hudson Valley Media Group, which publishes Orange Magazine. Not surprisingly, Anthony was incredible in terms of working with his subjects, including a not-always-cooperative eight year old boy. He spent most of the day with me/us and took some great shots.

Shortly before the deadline for Orange Magazine's June/July edition, editor Brenda Gilhooly called. After reading Deb's story and seeing Anthony's pictures, Brenda thought our story the cover feature for the June/July 2013 edition considering Father's Day, and all. She explained that she wanted an image of the family that had a deeper colored background for lettering. Anthony wasn't available for the follow-up, so Brenda asked my friend, neighbor, and director of photography for the Times Herald-Record, John DeSanto, to snap the the cover photo, which he did one weekend afternoon at the local high school.

Of course, the story wouldn't have been complete without the inclusion of three of the recipes that I included in The Single Father's Guide to Life, Cooking, and Baseball, so Kathie Austin Photography contributed three examples of great food photography. Thanks, Kathleen! 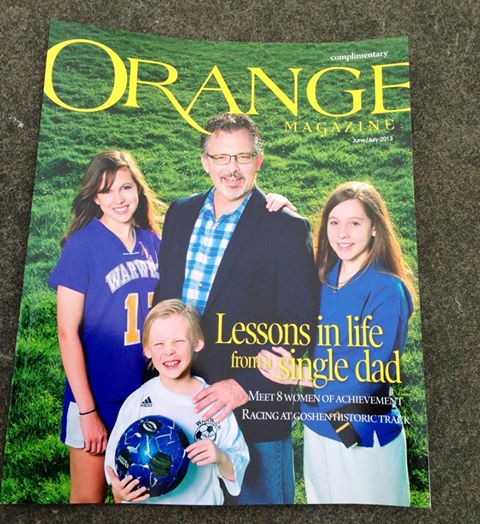 To order a copy of The Single Father's Guide to Life, Cooking, and Baseball, click HERE.

To order a copy of The Favorite Son's first book, Sometimes, My Dad and I, click HERE.