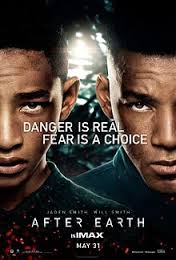 So, a supposed blockbuster movie starring one of my favorite action film stars, Will Smith, and directed by one of my favorite directors, M. Night Shyamalan, can't miss, right? On top of that, the premise is one in which a father and son who live in a future science fiction world are on a space ship that crashes into Earth, a planet humans abandoned a thousand years ago because the fauna and flora have evolved to rid itself of our species. Awesome, right? A father and son camping trip, right? Can't miss, right? Right? 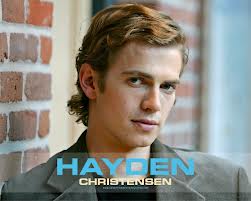 Well, that's not necessarily true. A Christensen-Wood production could potentially be better than After Earth if only Jaden Smith could somehow be kept off camera. 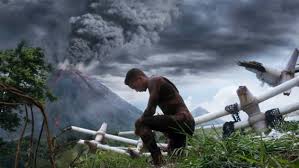 While Will Smith's on screen effort is quite a bit below average. In his defense, it's quite possible that Will's poor performance was an attempt to make his son's acting appear better by comparison. It's difficult to imagine, however, a worse actor than Jaden Smith who is completely outmatched by a dumbed-down script. His portrayal of Kitai Raige, a "ranger" candidate who desperately wants to follow in his hero-father's footsteps, is so bad that it's distracting. Sadly, the plot, which in most Will Smith action movies doesn't necessarily have to be anything special, isn't. No help from the special effects, which are nothing special, either. So, the audience is left with some odd, unlikeable characters who have a slightly strange accent that must represent the evolution of the English language a millenia hence. Apparently, grammar and elocution in the future have regressed, though, as Jaden doesn't seem to be familiar with the conjugation of the verb, "Be."

Obviously, After Earth was supposed to be Jaden's coming out party, thrown by his dad/co-star/writer/producer and his mom, Jada, who also is listed as among the list of producers. Sadly, the party appears to be more of a wake.

After suffering through After Earth, will I see the next Will Smith or M. Night Shyamalan movies? Very likely, yes. You can bet I'll check the cast list for Jaden, though. If he's listed as anything other than "Bystander #3," I'll probably check the listing for Hayden Christensen's new one, instead.