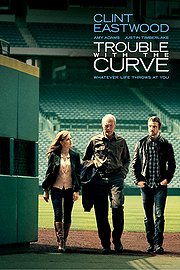 Considering the 2013 Major League Baseball season has begun, the Atlanta Braves have had an incredible start to the season, and my book IS entitled The SINGLE FATHER'S Guide to Life, Cooking, and BASEBALL, it just seemed right to include a tip of the cap to one of my favorite films of 2012, Trouble With the Curve.

Clint Eastwood continues to prominently feature fatherhood and, specifically single fatherhood among the films in which he's stars, written, directed, and/or produced. Eastwood stars as Gus, widower and a talented but aging baseball scout for the Atlanta Braves. Gus has a secret, which is macular degeneration is robbing him of his sight. Gus is dispatched to scout a phenomenal and potential first round draft pick, if not an extraordinarily arrogant high school talent, Bo Gentry.

Gus' daughter, Mickey, portrayed by Amy Adams, is a lawyer who is enlisted to "keep an eye on her father" by long time friend and fellow Braves' executive, Pete Klein (John Goodman). Mickey is reluctant to be coopted by Pete for a number of reasons, not the least of which is her resentment toward Gus for sending her to live with relatives when she was a girl rather than live with him on the road.

Mickey proves she can handle herself both around the baseball diamond and around her father, but, as a grown woman who fosters profound father abandonment issues, has more trouble dealing with, Johnny (Justin Timberlake), a potential love interest and rival Boston Red Sox scout. No spoiler here, but the audience learns just how much a father and daughter are alike while answering the question, "Can a person move beyond disappointments from the past to live a happy, healthy, and productive life."

In all, Trouble With the Curve is a terrific baseball movie, a wonderful father/daughter relationship movie, and a superb single father movie. The cast turns in quality performances, which always has the effect of making a good story better. Of course, Eastwood is incredible, but I continue to be impressed with Justin Timberlake who seems to get better and better each movie he makes. More than worth the rental or download.

Now, we'll just have to wait and until October to see whether the real actual Atlanta Braves finish the season as effectively Gus gets the last laugh. Enjoy.