Porcelain Angel: A Daughter's Journal of a Mother's Journey Through Mulitple Sclerosis

﻿ ﻿﻿On February 9, 2013, my friend Allison Redfern’s book, Porcelain Angel: A Daughter’s Journal of a Mother’s Journey Through Multiple Sclerosis will be released and available to purchase anywhere fine books are sold. Allison is a graduate of Lafayette High School in Wildwood, Missouri (the same high school as St. Louis Cardinals' third baseman David Freese and Philadelphia Phillies slugger, Ryan Howard) and an alumna of Indiana University. She and have a great deal in common, including our home town, many mutual friends, and the same publisher.

Beginning with glimpses at her journal entries, which reveal thoughts and concerns in the context of the diagnosis, the subsequent battle, and the daily joys and trials of motherhood, Porcelain Angel chronicles a family’s triumphs, tragedies, and emotions resulting from living with MS. As years pass and the disease gradually steals from Jane Redfern the ability to put pen to paper, her daughter unwittingly continues the narrative through her own journal writing as she describes her own passage from childhood through adulthood and the effect of MS on her family[i].
Clearly, Allison’s central theme is MS and the effect that disease had on her family. Although not the focus, the loss of a spouse for an adult man, in this case, Allison’s father, Rex Redfern, presents a series of challenges, even if his children are young adults themselves. When Jane succumbed to her disease, Rex became a single father.
Dad posed a question I absolutely never thought I would hear my father utter. “How would you girls feel if I were to go on a date?” I can’t imagine the expression on my face. It was not that I didn’t want my father to meet someone. He had been so incredibly lonely and his despair was almost tangible.[ii]
﻿﻿
While the challenges faced by a young single father may be arduous, those encountered by a mature single father may be no less profound. After decades of marriage, how does a single father who has adult children approach personal relationships? Rex Redfern’s tack, which began with a frank conversation with his children, was about as sound as it could have been.
***
Reading Porcelain Angel is literally like sneaking into your sister’s bedroom, stealing her diary, and poring over it with forbidden indulgence. An authentic, raw autobiography, biography, and memoir, Allison Redfern’ personal account of her mother, Jane Rolston Redfern, whose battle with Multiple Sclerosis the reader will not soon forget.

To learn more about Allison, Rex, and Jane, pre-order your copy today:

Porcelain Angel:
A Daughter’s Journal of a Mother’s Journey Through Multiple Sclerosis 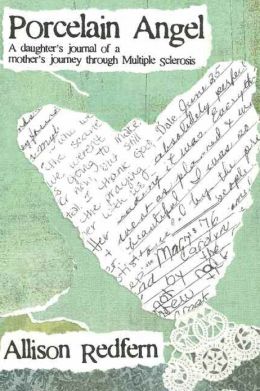 --To make sure you're getting blog posts and news, check out Matthew S. Field's author page at Author Profile: Matthew S. Field and connect on Facebook at Matthew S. Field - Author and subscribe to The Single Father's Guide by adding your email address at the upper right side of this page.