CONTENT WARNING: This post is intended to be “straight talk” between one single father, me, and other single fathers who will read it. Obviously, members of the fairer gender may read this post and find some of the content offensive. Read at your own risk. 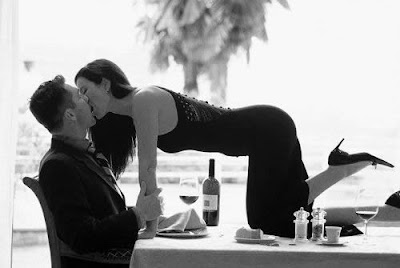 Okay, single fathers. Here’s a question for you. Is sex on the first date a good idea?
There’s an old adage repeated by men around poker and pool tables and on golf courses everywhere that goes something like this: “Good sex is good sex. Bad sex is good sex.” The obvious implication, at least from a man’s perspective, is “There’s no such thing as bad sex.”
In working title Dating, Sex, and Relationships the Second Time Around: The Single Father's Guide, I suggest that the single father will encounter potential romantic interests who fall into one or more of four groups:
1. The Lady with the Lamp (LWL) – In the spirit of Florence Nightingale, the LWL sees the divorced or widower single father as a man to whom some injustice has been done and sees her role as one who is willing to provide comfort.
2. The Career Woman – The Career Woman is typically intelligent and successful. She has achieved just about everything she has wanted to achieve in her career during the decade or two since she finished college and/or entered the workforce, but has yet to reach the same level of accomplishment in her personal life, like a committed personal relationship with a man and children.
3. The Pragmatist – The Pragmatist may often also be a Career Woman, but she’s been down the road a few times with widowers and/or divorced men. She’s already tried to make it work with the guy who hasn’t properly grieved the end of his previous relationship or who hasn’t addressed the personal issues that led to its demise. She knows what she wants and won’t settle for anything less than a strong, committed relationship.
4. The “Girls Just Want to Have Fun (GJWHF)” Girl – Well, this is pretty straight forward. The GJWHF Girl just wants to have, well, some fun. No strings are attached.
While there's something to be said about good things coming to those who wait, I’m truly a “live and let live” kind of guy. At this point, you aren't a naive child anymore, and, more than likely, neither are your potential romantic interests. So, if you’re honest with yourself and honest with your potential romantic partner about who you are and what you want, then I think two consenting adults can and should do what they want to do. Given the women you’ll encounter while dating, however, I have some advice.
﻿﻿First, The LWL may also be a Career Woman or a GJWHF Girl. If she’s is the latter, then there is nothing wrong with enjoying her company. If she’s a Career Woman, however, and if she wants to have children, then don’t string her along! Caution, the LWL may be a married woman whose need to provide comfort may be greater than her need to adhere to prior commitment. In that case, brother, leave it alone. The possible repercussions for her, you, and others simply aren’t worth the short term benefit.﻿﻿﻿﻿﻿﻿﻿﻿﻿﻿﻿﻿﻿﻿﻿﻿﻿

Second, as I’ve alluded, the Career Woman has been successful in her career and has realized that her time to have a family may be running short. She may want to move quickly toward marriage and children. With the single father, she may see the opportunity to have both right away. If your vision of the future is consistent with hers, then there is no problem. If your visions aren’t the same, then don’t string her along. Caution, your romantic interests may not always be as honest and forthcoming about their intentions as you are. If you aren’t careful, you may get, ten or so months after a first or subsequent date sexual encounter, more than you bargained for.
Finally, if you just want to have fun and you’re dating a GJWHF girl, well, as long has you and your partner are on the same page on everything ranging from bedroom etiquette to birth control, then by all means, have fun.
You might have noticed I didn’t address The Pragmatic. The reason is simple. She's a woman who knows what she wants and does as she pleases. Unless you're mature, responsible, and emotionally healthy, she'll likely not give you a second look.
The bottom line here, my brother, is this: be honest with yourself about the things you want in a relationship. Then, be honest with your partner. After that, well, it's just none of my or anyone else's business what you and another consenting adult do in your spare time.