Coming to a School District Near You: Choose Sensibly?

So, let me get this straight.
Among other New York school districts, The Warwick Valley Central School District where my three children attend school has instituted “a pilot program through the New York School Nutrition Association.[i]” The “Choose Sensibly” program, which “was incorporated into the district’s Wellness Policy[ii],” prohibits homemade food for all in-school events, all after-school events, all booster club fundraisers, and all PTA fundraisers.
For emphasis, parents cannot bring any homemade food to any school function. The Choose Sensibly program defines “homemade” food as “items prepared in a home or non-commercial kitchen[iii].”
On my son’s next birthday or non-denominational holiday party in his classroom, I can’t make vanilla cupcakes, oatmeal cookies, Crumb Cruncher's Evolving Trail Mix, (my famous) Old Man's Secret Recipe Garlic Parmesan Chicken Wings, or anything else in my kitchen and bring it to school. If you have children in school, neither can you.
A partial list of the items that you can bring to a school party, a school dance, or a booster club fundraiser includes Dewafflebakers Gourmet French Toast, including 3 grams of fat, 190 calories, and 230 grams of sodium, and Camden Creek Reduced Fat Chocolate Chip Cookie Dough, which contains a whopping 6 grams of fat and 200 milligrams of sodium per cookie! Then, of course, parents can stick a birthday candle in a Superbakery Reduced Fat Super Donut, which chocks 6 grams of fat, 200 calories, 270 grams of sodium, 14 grams of sugar, and 31 grams of carbohydrates in each 2.2 ounce doughnut[iv].
If a mom or dad has a crunchy snack in mind for their little scholar, Jonny Rapp’s Ketchup Baked Fries in the one ounce size are just fine, and so are the 4 grams of fat and 230 milligrams of salt.[v] Funyuns are also on the list. In addition to the 120 calories, 7 grams of fat, and 270 milligrams of sodium in the filling .75 ounce bag, the kids will also enjoy monosodium glutamate, gum arabic[vi], which is also “used in printing, paint production, glue, cosmetics and various industrial applications[vii],” and at least the recommended daily allowance of artificial colors. 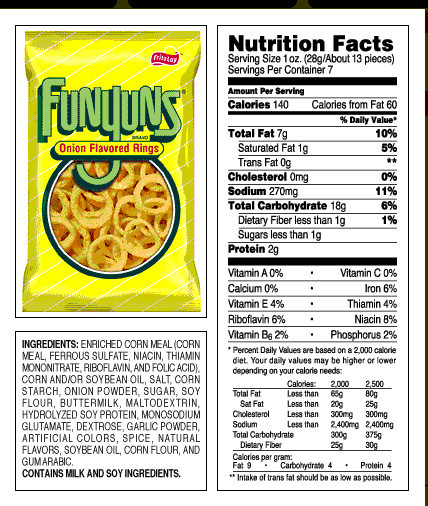 If the nutritional standards for Choose Sensibly aren’t enough of a concern, then the cost of purchasing products from the Choose Sensibly Snack List is. For example, if you can even find the .75 ounce bags of Funyuns, you’ll have to buy in bulk for the class. Likely, you’ll need at least 24 of those yummy little bags, so you’ll probably buy the Funyuns “Go-Bag,” which contains 12 snack-size bags. I could only find Funyuns Go-Bags for sale from an on-line vendor for about $7 each. So, you’ll get 24 of the .75 ounce snack bags of Funyuns for about $14, or roughly $12.44 per pound of snack. I’m pretty sure the makers of Funyuns will throw in the MSG, gum arabic, and artificial colors for not extra charge, though.
On the other hand, if a parent wanted to make blueberry muffins, including flour, blueberries, milk, eggs, and so forth, she or he could do it for less than a sawbuck, and that includes the blueberries. Each muffin would be about three ounces, so the cost per pound of snack, I would argue a much healthier snack, would be just $2.22.
So, if I have it right, Choose Sensibly will often, if not always, be less healthy or more expensive?
Huh?
Don’t get me wrong. I advocate for healthy lifestyles and, yes, I get it. Our local school districts are required to align with the New York School Nutrition Association, which, in turn, must fall in behind the new Department of Agriculture mandates. However, I’m not sure whether the institutions who have apparently failed to teach many of today’s parents the fundamental concepts of nutrition and a healthy diet during the past several decades should now tell us the foods our children can and cannot eat . . . or the foods I can bring to my son’s class birthday party.
Frankly, I’m not sure how sensible Choose Sensibly is. It appears to me that Choose Sensibly may well have been created by, now, what's that word for a person who is the opposite of sensible?
[i]New Guidelines for Acceptable Snacks, Concessions, and food-related fundraising.” www.warwickvalleyschools.com. September 13, 2012.