I recently stumbled across a Match.com article posted on Yahoo! News entitled "6 secret turn-ons for men" written by Matt Schneiderman. Obviously, the blog was written for women, but how can I put this tactfully? Well, I guess I can't. I'm afraid I disagree with Mr. Schneiderman, at least when it comes to single dads. Frankly, knowing what I know about men . . . because I am one, and knowing what I know about single dads . . . because I am one, I'm not sure much this applies to most of us.

With tongue mostly, but not completely, inserted in my cheek, here's my take:

He loves that you indulge at dinnertime - This may have some validity for newly minted single dads. Those guys are still feeling their way around not only the kitchen, but single father life in general. Seasoned single dads have either learned their way around a kitchen, hired a cook, or have starved. However, if you happen to be a woman dating a single father who gets aroused by your lasagna, he's too new in the dating world to be serious about a long term relationship. 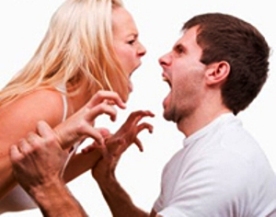 He loves your occasional outbursts - Dictionary.com defines the word, "outburst," as "a sudden and violent release or outpouring: an outburst of tears." No guy I know really gets stimulated by a "sudden and violent" release of anything, e.g., Lorena Bobbitt's sudden and violent release of John Bobbitt's, uh, well, you know. And, of course, every guy enjoys a volatile outburst of tears from the woman he loves. MAN: "Hi, honey! I'm home." WOMAN: "Aaaaaaahhhhhh ah ah ah ah aaaaaaahhhhhh." Single dads already deal with tantrums from tired toddlers and tempestuous teens. Here's a secret: I don't think another dimension of irrational behavior will turn-on a single dad. Sorry. Not getting it.

He loves that you aren't a neat freak - This may actually be code for, "You're the next guest on a special episode Hoarders!" Look, I know a lot of guys aren't much for housekeeping. Still, I'm not sure any guy wants to see his girlfriend's or wife's soiled undergarments on the bedroom floor. The single dad is already busy enough picking up his own kids' dirty clothes.

He loves your extra padding - Yes, love is in the eye of the beholder, but I think most guys appreciate a woman who respects herself and her partner enough to eat right, exercise, and stay healthy. In his book, His Needs, Her Needs: Building an Affair-Proof Marriage, Willard Harley lists "An Attractive Spouse" as #3 on "His" List. Like it or not, men are visual and usually first become interested in a woman based on her physical attributes. Most men will have trouble seeing a woman's inner beauty if he does not see her outer beauty first.

He's passionate about your knowledge of things you're passionate about - Have you ever seen commercial that shows the lengths a guy will go to get a Klondike Bar? Well, if you haven't, here it is. Enough said.

In the meantime, if there are any single ladies reading out there, don't put too much credence in Scheiderman's "secrets." You'll have wasted your money on Match.com, have to renew your membership, and have to start over . . . which is probably what they want you to do if they keep posting articles like this one.