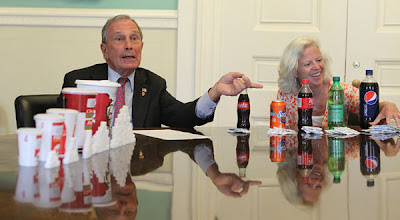 This single father, I must admit, is a little conflicted about the ban of the sale of large sugary drinks by New York City’s mayor, Michael Bloomberg. In The Single Father’s Guide to Life, Cooking, and Baseball, on one hand, I encourage single fathers to “replace sugary drinks including soft drinks, fruit juices, and energy drinks with water or other no-sugar-added beverages. Heck, that’s the Single Father’s Golden Rule #13! On the other hand, I also advocate that if a single dad has an occasional “itch to scratch,” like an unrelenting desire to eat a Big Mac, a Whopper, or The Colonel’s Original Recipe once in a while, then he should! If Bloomberg or another politician decides to ban specialty sandwiches or one or more of the "eleven herbs and spices," well, that itch would go perpetually unscratched. 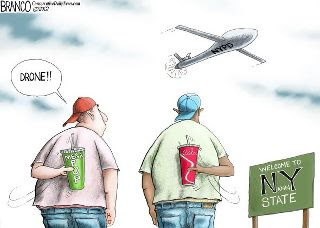 More important than any one of the Single Father’s Golden Rules in The Single Father’s Guide to Life, Cooking, and Baseball, is the subtext of personal responsibility is a consistent theme. As a single father, you’ve made decisions, some good and some bad. Every decision you’ve made has contributed, for better or for worse, to where and who you are today. If “being a man” is defined as an adult male who takes responsibility for his decisions, then be a man.

There will always be circumstances beyond your control, like the maximum number of ounces of Coca-Cola you can buy at one time. In spite of those other circumstances, be responsible for yourself and your kids. Use your judgment when making decisions about clothes, activities, and yes, diet. While you're chewing on that, here’s a quick recipe for a healthy drink that takes Mayor Bloomberg completely out of the decision-making processes in your kitchen:


Combine ingredients in a blender. Blend on “High” setting for 15 seconds or until ingredients are smoothly whipped. The preparation time is approximately three minutes and is enough for a thirsty, health-conscious dad and a couple of his sugar-deprived children.