The youngest of four daughters, Eduviges “Duvi” Preciado Wolf had wanted to be a soldier since she was a little girl. She volunteered with the Hawthorne Police Department to fingerprint children and worked traffic control at parades and other community events. At Leuzinger High School in Lawndale, CA, Duvi joined the Junior ROTC program. She explained to her father about her decision to enlist in the U.S. Army shortly after graduation that military service would be her path to citizenship. 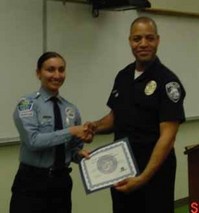 Duvi was assigned to the 7014th Brigade Support Battalion, 4th Brigade Combat Team, 4th Infantry Division, Fort Carson, CO as an Automated Logistical Specialist. She had been in Afghanistan for about four months when insurgents attacked her vehicle with a rocket propelled grenade. On October 19, 2009, Duvi died in Kunar province from wounds she received during that attack.


Duvi is one of the thousands of American heroes who will be honored this Memorial Day, but there is more to her story. When Duvi was killed in action that day in October almost three years ago, she left behind two young daughters, Valerie and Isabel. On that day, Duvi’s husband, Army Sgt. Josh Wolf, became a single father.
On Monday, remember Duvi Wolf and all of the men and women who risk their lives and who have given their lives to protect the freedoms we enjoy here in the United States of America. Remember also the sacrifices made by the families of those who have died, especially the surviving parents, fathers and mothers, who are left to make a home and care for their children alone.

May Duvi’s memory, and the memory of all our fallen soldiers, live on through their children . . . and through every one of us.


“Killed in Afghanistan or in support of Operation Enduring Freedom.” NoonieFortin.com. Copyright 2004-2012.